Depending upon who you listen to, there seem to be two points of view with this election.

One is that Hillary Clinton is going to destroy Donald Trump in a landslide. The polls show her winning the popular and electoral vote. And they show her being competitive in states where Democrats are never competitive. She can’t possibly lose and this thing is in the bag!

The other is that the polls are wrong and Donald Trump is going to win. There are, of course, two very different groups that support this second view. The first is the conspiracy theory loving Trump supporters that think the polls are made up and part of the vast Clinton machine that is working with the “the media” to steal the election. The second is the “pants wetting” liberals (like me!) that worry about a Brexit like result where Trump supporters aren’t admitting their support and are under-represented in the polls. 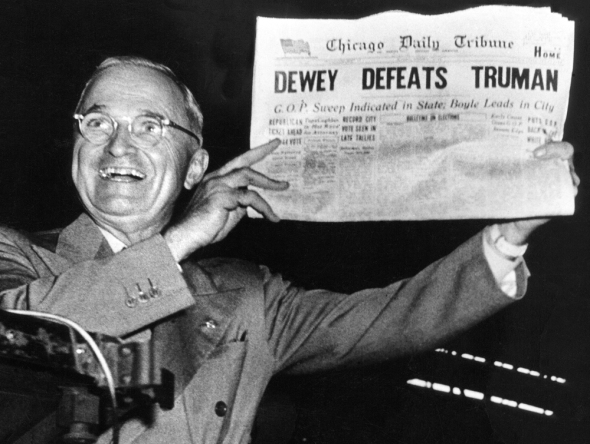 Some may remember a certain election in 1948 that was famously called one Thomas Dewey the 34th President of The United States. That of course, was the subject of the Chicago Tribune headline that boldly proclaimed “Dewey Defeats Truman!”

The moral of the story is don’t believe the polls. Polls don’t elect Presidents, We The People do.

So please, don’t let the polls encourage or discourage you. Go vote!

This site uses Akismet to reduce spam. Learn how your comment data is processed.

Our Advocacy by Posts